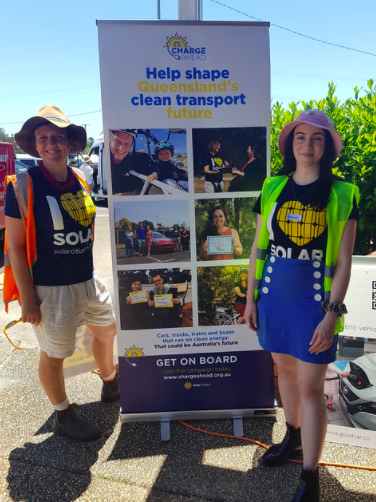 Charge Ahead: a new grassroots community campaign to urge policy makers to accelerate the electrification of Australia’s cars, buses, trucks and trains to reduce transport emissions.

Launched by community group Solar Citizens, the Charge Ahead campaign will build on the successes that have made Australia a world-leader for residential solar.

The success of Australia’s rooftop solar industry shows what is possible when governments incentivise consumers to make smart choices. Australia lags behind the rest of the world when it comes to the transition to electric vehicles, but there are opportunities to turn this around so more people can share in the benefits of clean and quiet vehicles that are cheaper to run and maintain.

The people-powered campaign will urge federal, state and local governments to take action to support EVs and slash growing transport emissions. One campaign priority will be delaying the introduction of EV road user charges until more electric cars are on the road. Road user charges make sense for the future, but if introduced prematurely they will just act as a handbrake on the transition to EVs.

The campaign will also encourage politicians to look beyond passenger vehicles. Removing barriers to make electric vehicles more affordable for consumers is important, but it’s also important to grow the use of renewable energy in transport by electrifying bus fleets and repowering trains and trams with clean energy.

All levels of government will be encouraged to use their buying power to electrify fleets, which in turn will stimulate the future second-hand EV market.

The benefits of a thriving electric vehicle industry in Australia are far-reaching. Electric transport will play a crucial role in safeguarding the electricity grid by soaking up excess cheap solar energy.

And importantly, Australia is well-placed to process minerals and manufacture parts for electric vehicles, like batteries. The growth of this industry will unlock huge economic opportunities and future-proof jobs for Australians.

The Charge Ahead campaign will build a strong community collective to accelerate these opportunities and create a clean transport future for all Australians.